This will be my final post for a while, until I am settled in Sweden so I thought I would write about a method used to make fire in Lapland from a live Birch tree.  My friend Heiko showed me how to do this during a winter visit in 2007.

Firstly you have to fell a Birch

Remove all the side branches from the trunk

The branches are reduced down to three different sizes 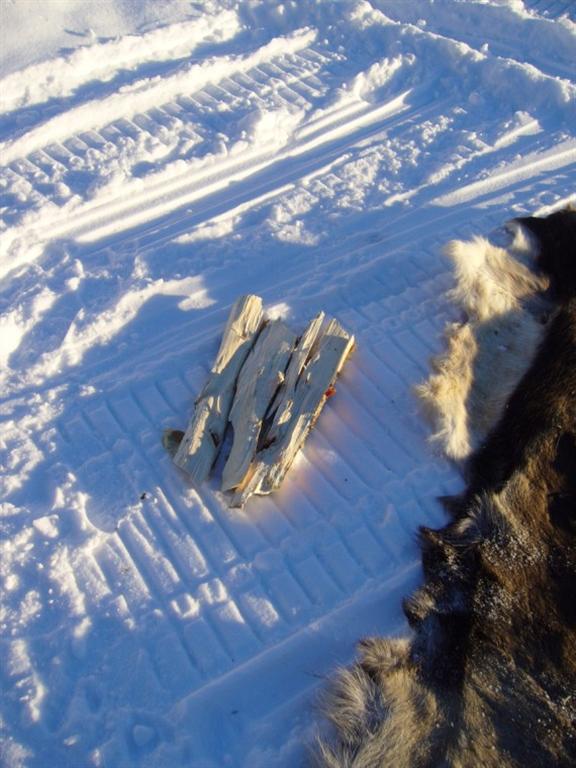 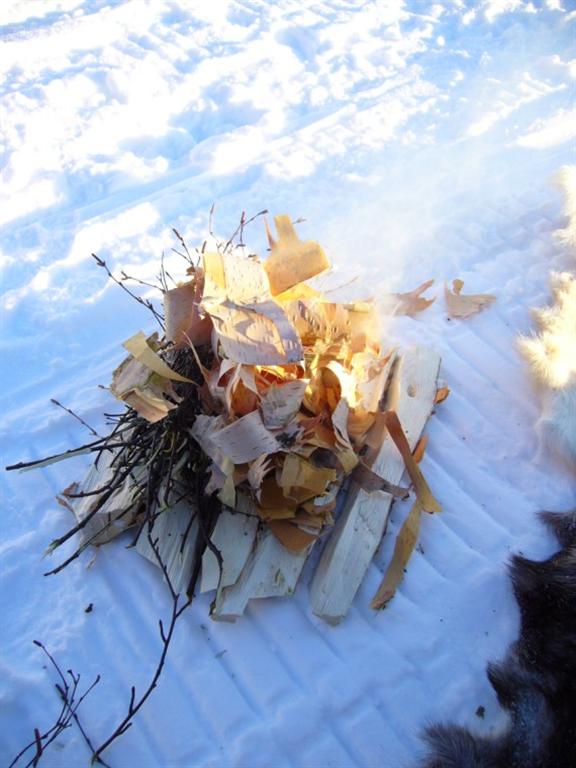 Once the fire is burning, begin adding larger fuel 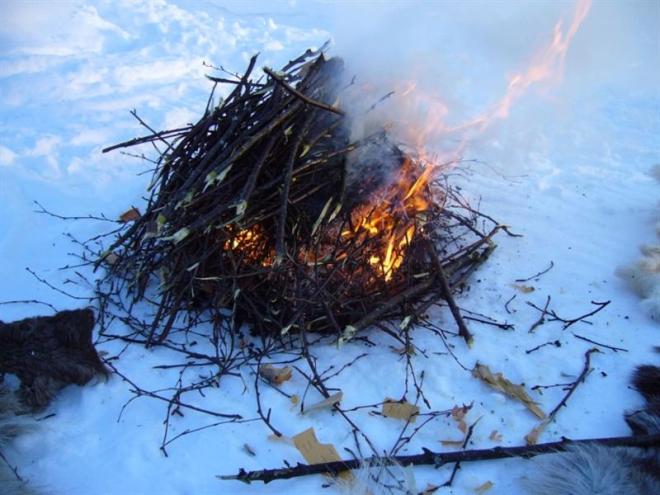 and soon you will have a warming which at -30 degrees C you really appreciate!!

I have no idea how long it will take to arrange broadband in Lapland but I will be back as soon as I can…..byeeee!

So one week tomorrow I leave my home to catch a bus to the airport and at 7am the following morning I leave the UK for Sweden.

I have finished packing my boxes now

I have ended with 200 kilos and the boxes will be shipped a few days after I leave.

I have had three gatherings of friends recently for farewell celebrations.  Yesterdays was a meal and drinks at a pub with ex work colleagues

and the final one on Thursday will be with friends who are organising a road trip from the UK to come and see me in Lapland in the autumn.

I am pleased that some of my friends are planning to visit.

A significant part of my job during the past nine years has been managing and being responsible for a small herd of Asian Water Buffalo on one of our reserves.

When you mention buffalo people usually think of American Buffalo (Bison to be correct) or the notoriously aggressive African or Cape Buffalo. However, although wary of strangers Asian Water Buffalo (Bubalus bubalis) are quite docile and relatively easy to handle. Our lead animal will in fact roll over so that I can rub his belly.

I have compiled this fact file about Asian Water Buffalo

The buffalo stay on the site all year and are ideally suited to the wet conditions on the reserve and in summer spend a lot of time relaxing in ponds or ditches.

In fact the perimeter fence has to go down under water where it crosses the ditches to prevent the buffalo swimming out!

When I wrote this post we were constructing a facility for handling the buffalo to check their health and condition, which worked really well.

Yesterday was my last day at work.  I have worked for my current employer for the last nineteen and a half years, managing a variety of nature reserves and habitats.

At the age of eleven I began helping out in a small nature reserve located in the town I grew up in.  I then started cycling 13 miles at weekends and school holidays to work as a volunteer for The Wildfowl & Wetlands Trust, talking to visitors in the birdwatching hides and undertaking some practical management tasks.

When I left school I worked for the Royal Society for the Protection of Birds for two years on a work placement scheme and after that I returned to The Wildfowl and Wetlands Trust and worked for them for two years.  After leaving WWT I began working for what was at the time Nature Conservancy Council (my current employer).

A colleague noticed another strange coincidence yesterday that reinforces my belief that I am doing the right thing….the expiry date on my staff pass is January 2010!!

Last Christmas I wrote about Christmas with a difference and this year Christmas dinner in the woods was even more popular with 16 of us gathering to cook, eat, drink and have fun. 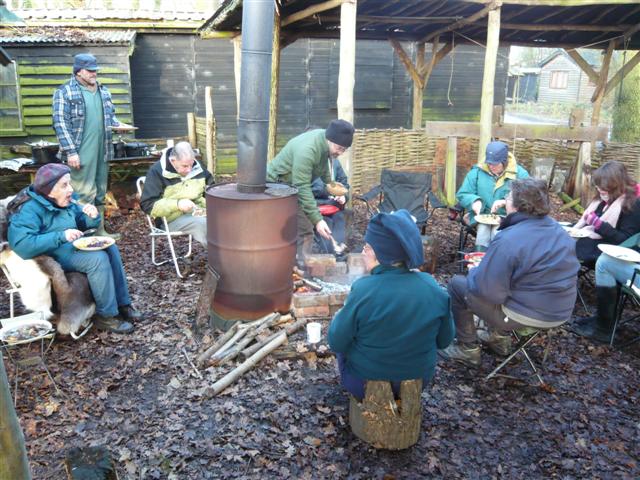 Most of the snow and ice had gone but there was a bitterly cold north-easterly wind blowing.

Everyone had to provide and cook something towards our feast this year; we had two joints of home grown lamb as our meet, roast potatoes & parsnips, boiled green cabbage & pickled red cabbage, stuffing and gravy. 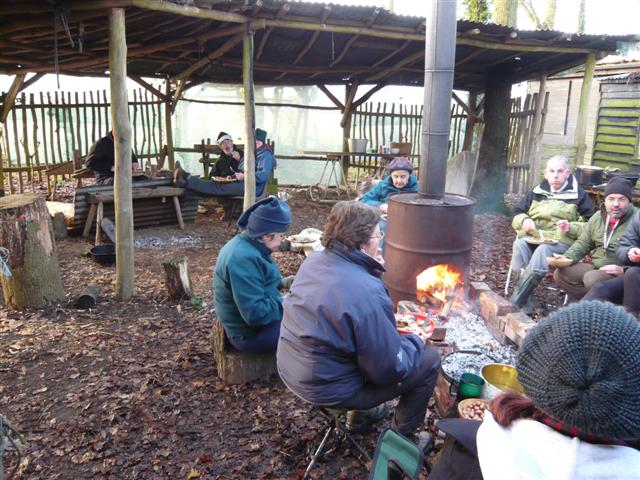 For our second course we had; home made mince pies, apple and blackberry crumble, apple and blackcurrant pie and cheese and biscuits.  Even BAH HUMGUG!! enjoyed himself ;>)

I’m not planning to work at all during my first year in Lapland but will instead spend my time  learning to speak better Swedish, making new friends and contacts, making crafts to sell and I have applied to work as a volunteer for the Scandinavian Brown Bear Research Project but as yet I have had no response.

Although I do not plan to work full-time, in 2011 myself and Johan from Nordic Bushcraft are planning to run some courses together and I will be looking for other opportunities for part-time work, so if you have business in Lapland and you feel my skills and knowledge are  relevant please get in touch for a chat.

I will again be visiting Jokkmokk’s Marknard this year which takes place the same week I arrive in Lapland (that is no coincidence I can assure you!) to buy skins, leather and other goods for making crafts items.  If you will be there on Friday or Saturday  and are interested to meet up then please email me.

I have been unhappy in my job for some considerable time now and previously in my life in similar circumstances a new opportunity of employments has always presented itself  but not (as I thought) this time.

However, during this period of discontent I started travelling to Swedish Lapland, and as a result the opportunity to buy my cabin presented itself

During a snowy three week stay at my cabin in May 2008 a couple appeared late one afternoon walking their dog (the only people I had ever met there) and came to introduce themselves.  Anki spoke some English but Ingvar did not and at that time I spoke virtually no Swedish!  Somehow we managed to communicate and I was invited to their cabin  for coffee and some food.  We have become very good friends and I often refer to them as my Swedish mamma and pappa.  During several subsequent trips I have become good friends with there family with whom I get on very well and they all make me very welcomed.

Over the last five months my friendship with their daughter Teres has developed into a relationship and as someone who loves to be out in the forest and the nature we are ideally suited .

So I have come to realise that it was not a new opportunity for employment that was presenting itself to me, but the opportunity to begin a new life in a place where I love to be and with people I love to be with!!

For that reason I have over the past few weeks been executing a plan which has culminated in me today giving my employer my letter of resignation from my job.  My last day of employment will be Friday 29th January and on Tuesday 2nd February I leave the United Kingdom to begin a new life with Teres, Simon, Sebastian, Emma and the rest of the family in Swedish Lapland!!

My home, car and furniture have been sold and the belongings I will not take with me have either been sold, given away or dumped.  I am paying to ship only 200kgs of my belongings to Sweden (thanks Rick) as this continued journey of discovery and learning of bushcraft and wilderness living skills teaches me that many of the things I valued in the past really aren’t that important!

To all my friends you will be more than welcomed to share a place around my fire anytime.

I will be posting here over the next month when I can and I will be continuing this site once I am living in Lapland.

As we begin a new year I thought it would be interesting to look back at my blog for 2009.

The five most popular posts so far are;

﻿The most clicked links were;