Unfortunately SEAT do not see condensation in an engine as an issue, and refused to do anything with my car.  Googling I see that many have had the same problem with the VW diesel engine that I have, so I’m sure this will not be the end of the problem!!

Some positive news is that I have just secured a place on the Morakniv (Mora Knife) Adventure 2017.

As I write this post and link to Mora’s site I see that the event is already fully booked!!

This is the programme for the event…

Day 1, Thursday May 18:
We start our adventure at the Morakniv factory with an exclusive factory tour that will take you on the path from steel to finished knife. Thereafter a transfer will take us to the Adventure Base Camp.

Day 2, Friday May 19:
Basic skill day! Join in on the workshops held by our ambassadors and take part of their great knowledge. Dave Canterbury will show and teach various bushcraft must-knows, Johan Skullman will teach you what you need to know to explore and survive in the outdoor, and together with Jögge Sundqvist and Beth Moen you get to learn the art of woodcarving.

Day 3, Saturday May 20:
Apply day! Time see if you picked up any useful information yesterday. This will be a day filled with surprises, so at the moment all we can say is that today will be adventurous, fun, and just awesome.

Day 4, Sunday May 21:
Sunday will end with a common camp breakfast before we pack up our gear and close the camp. Busses will be departing back to the original pick-up locations approximately 10:30
AM.

We have been very happy with the car and the customer service we received three weeks ago when the car had it’s first service.

Last Wednesday I checked the oil in the car and it was only half full, so I bought some oil in Gällivare on Friday and on Saturday morning I was going to put oil in the engine.  When I removed the dip-stick the oil was thick and grey and white in colour indicating that there was water in the engine.

I telephoned SEAT assistance and explained the situation and they said they would send out a recovery vehicle and the car would have to be taken to the nearest SEAT garage which is 230kms from where we live.  They informed me that I had the right to a hire car and as my car would be repaired in Luleå they advised me to hire a car from there and go with the recovery vehicle to collect a hire car.  I agreed and SEAT said they would locate and book a hire car for me during the journey.

When I picked up the hire car, they informed me that under SEAT assistance rules, I only had the right to a hire car for 5 days, and that I must pay to insure it.  After 5 days I have to claim a hire car through my SEAT insurance policy and pay 1000SEK and 25% of the hire costs.  I had wrongly assumed that as this was a new car, with a new car guarantee, I would incur no costs.

During my drive home with the hire car, the recovery driver called me and informed me that he had mistakenly left his own keys with my vehicle at the SEAT garage and had taken home my car keys (he lives three hours from Luleå.  As I had an appointment at Luleå hospital and Monday, he asked if I could take the reserve key with me to Luleå and then take home his car key (why do these things always happen to me!!)

The garage have called me today and said that there was only condensation in the engine, situated just around the dip-stick tube, as though it was no big deal.  I asked why this had happened and why everything looked normal on Wednesday, but had changed on Saturday, and they could not explain this, so I said that this was not acceptable.  They have now referred the problem to Volkswagen in Germany for an explanation as to what has happened and a decision as to what they can do to fix the problem, but SEAT have said that they will not agree to loan me a car until my vehicle is returned.

The current situation is that on Friday I must return the hire car, but then have no way to get back home from Luleå.

On Friday morning we had a Pygmy Owl in the garden, but I did not manage to get a photograph of it (this is an old picture).

During the excavation of a stone age dwelling near Vuollerim, here in Swedish Lapland two different examples of slate knives were found.

The first is this crescent shaped knife

An ulu  (translated means “woman’s knife”) is an all-purpose knife traditionally used by cultures around the Arctic Circle including; Inuit, Yup’ik and Aleut women. It is utilised in applications as diverse as skinning and cleaning animals, cutting a child’s hair and cutting food.

This particular knife has a blade made of locally sourced slate, which has been inserted in to a piece of wood.  The blade is held in place using ”Resin glue” – Resin from Pine or Spruce trees is gathered, heated and then mixed with crushed charcoal to form a primitive glue which was very much used by native people around the Arctic Circle at that time (and still is).

The second knife is a little more like knives we use today.  Unfortunately we do not have a copy of this knife, so I was asked to make one, based on drawings and text.

I’m very pleased with the end result.  The original was bound with Moose hide, but as I did not have any, I used Reindeer leather.

There is still very little snow here at the moment (four hours drive south of here they have about one metre).  The daily temperatures are around -10 to -15 degrees.

By sitting at my dad’s bedroom window, I finally managed to get a couple of decent pictures of the Grey Woodpecker which I wrote about last week.

and now we also have a Three-toed Woodpecker (Picoides dorsalis) visiting, but unfortunately this picture is a little blurred.

The Stoat or Ermin as it is called when it has white fur, has been more obliging, allowing me to get quite close when it feeds.

and a Hawk Owl has been keeping an eye on them 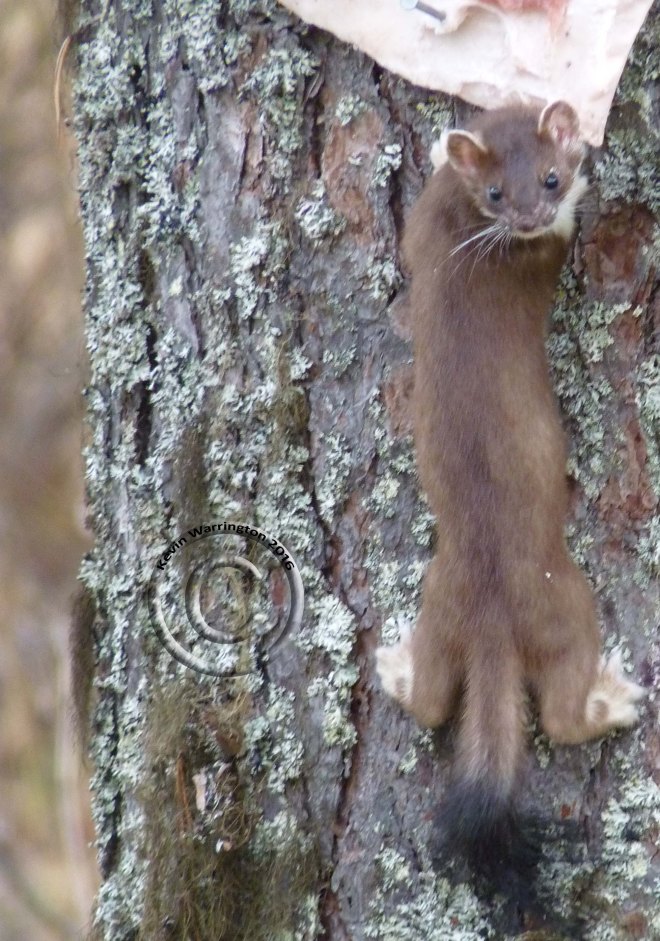 I took the above pictures a couple of weeks ago, and now the Stoat has moulted to its white winter coat, but unfortunately I have not managed to get more pictures yet.

We also have a pair of Grey-headed Woodpeckers (Picus canus) visiting the garden, but they are so shy and flighty, that I have not been able to get a decent picture of them as yet. Here’s a picture from the internet 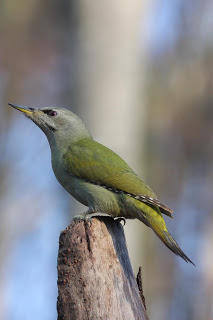 The geo-thermal heating is working very well, without and problems.  We are still waiting for a company to come and install a woodburning stove in the living room (it should have been completed in September).