Before moving to live here in Lapland, I managed Chippenham Fen National Nature Reserve where we spent much time, money and effort to re-establish a plant called “Grass of Parnassus Parnassia palustris”

which grew there until the late 1980´s, but we never succeeded in getting it back again.

Here it grows very commonly.  We even have it along the edges of the track to our house (the above picture is taken at the edge of our track).

I have only noticed it growing there because we bought Kelly her first cycle and we now go out with her at least twice a day. 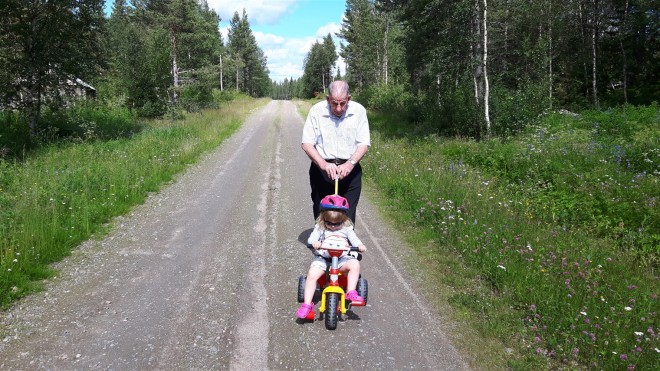 It’s not been an easy time for Kelly during the last few days, because she has thrown her dummies in the river, to give to the baby fish!! and now has to sleep without her dummy. 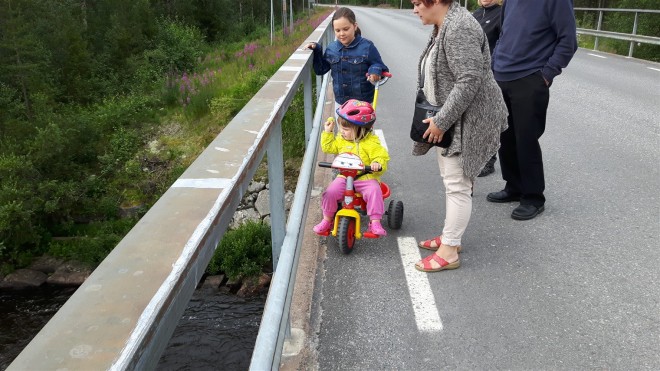 Kelly enjoys fishing, though soon gets bored when she does not catch anything.

I have mad her up a special fishing set.  The rod is really an ice fishing rod and i bought a small reel for it.

It works so well that I have one myself now, as with my back problem it is not so easy to cast a full size rod.  I cannot cast so far out, but as many of the fish are nearer to the edge, this is not a problem.  I have caught 2 1kg Rainbow trout with this set-up.

My dad has settled in now and is really enjoying spending time with Kelly and the rest of the family. 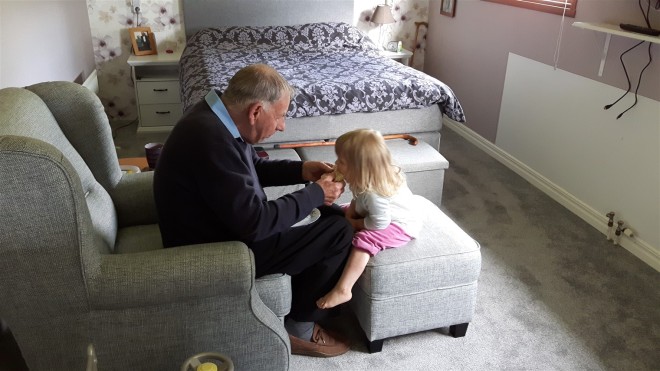 This week we have had a fox cub coming to visit our garden.  I first saw it in the meadow

and called it in towards me

The closest it ha been, is one metre from me 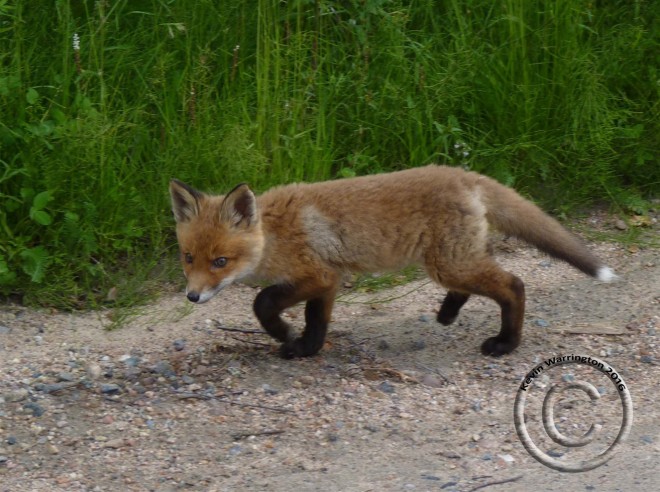 I have also found and picked and eaten the first Cloudberries (a relative of the Blackberry) of the year, which is incredibly early!! 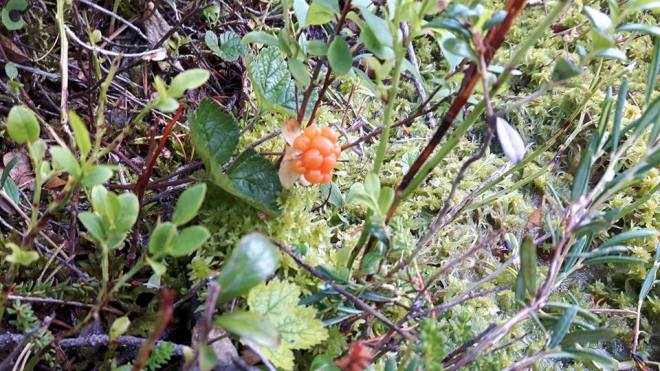 I am grateful to Teres, Emma and my in-laws who spent last Saturday painting the outbuilding that I built last year.

During the time I was unable to work, I changed my job.  I now work part-time in a General Store here in Nattavaara and part-time in Solberget Wilderness Village as a tourist guide.

Working in the General Store and looking after Kelly means that I do not have much spare time to make and do things, and so it is getting increasingly difficult to find things to blog about and so I am now considering the future of this blog.

Fortunately this week I am working as a tourist guide, so will have some things to write about.

Yesterday we took 25 guests out on a days wandering with four of our Reindeer, up to the top of Solberget (Sun Hill).  I talked about the wildlife and history of the area and talked about medicinal uses of some of the plants that we found.

Once we reached the top, we made fire and cooked sausages over the fire, before making our way back down again.

Today we ran a leather handicraft workshop, where our guests were able to make a hole range of items from Reindeer leather, including pouches, armbands, knife sheaths and necklaces. 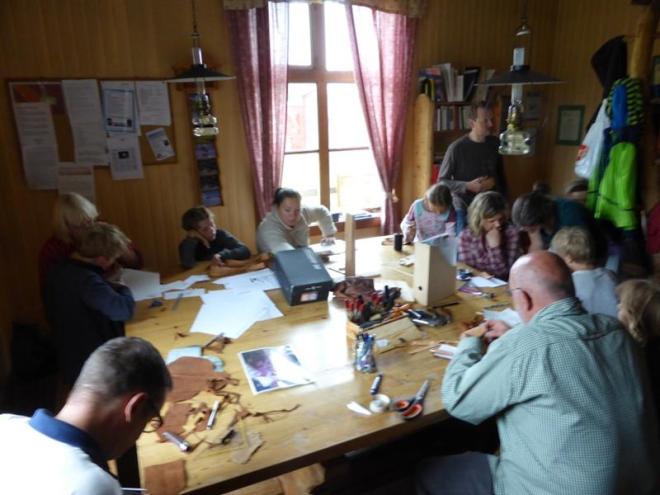 The leaves of Cattail/Bull Rush/ Reed Mace (typha latifolia) are used to make these dolls.

Unfortunately Reed Mace does not grow up here in Northern Lapland, so I’ve not been able to make them since moving here.  In the UK I gathered the plants during August, separated the leaves and laid them out to dry for several days.

Take one or two leaves and roll it up into a ball to form the head.

Take more leaves and fold over the head, ensuring it is completely covered.  Remove the outside edge of a leaf and use this is simple cord to tie under the head to hold these leaves in place.

Gather up 2 -3 leaves together and a third of the way along, twist them and continue to twist as if making cordage. 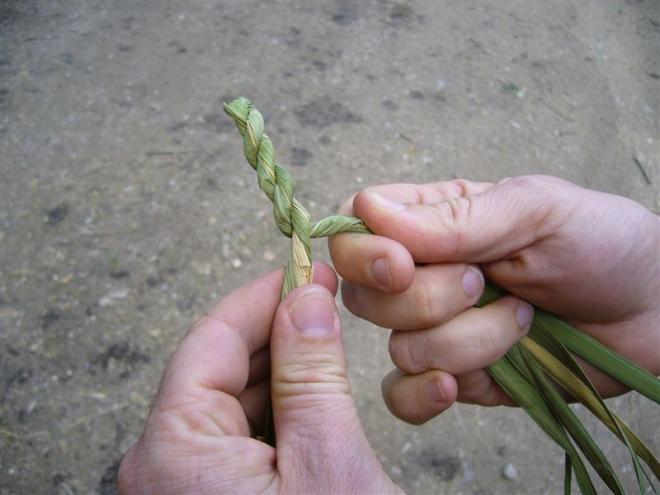 Then do the same from the opposite end to form the arms.

Separate in half the leaves wrapped over the head and insert the arms between them.

Now cross leaves over and under the arms and around the body to help form the dolls shape and secure everything in place.

Fold some leaves over the shoulders and tie these leaves in place both around the breast and at the bottom.

Here are some Birch bark containers 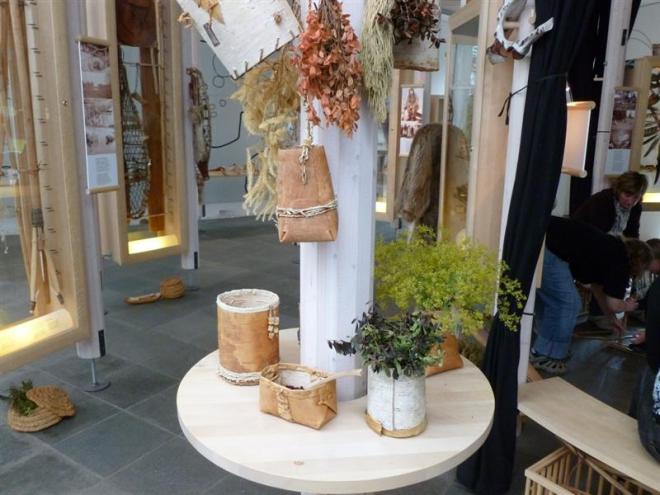 This is a small pouch made from a goose foot 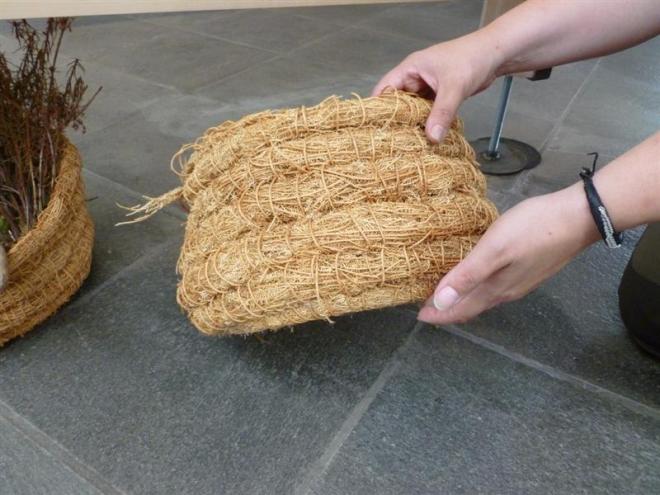 We also visited the dig site to see one of the buildings they excavated. 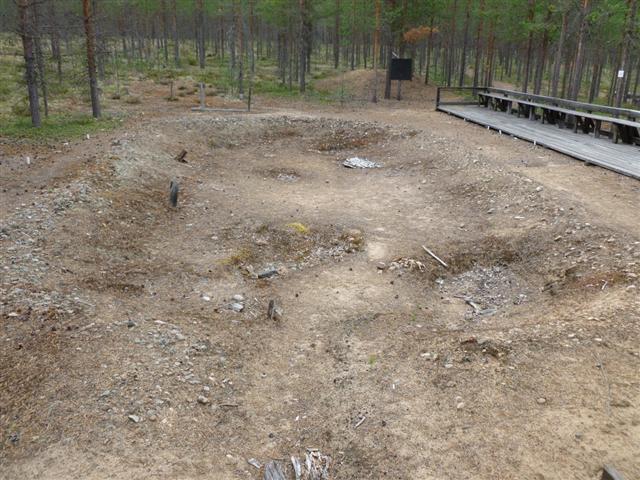 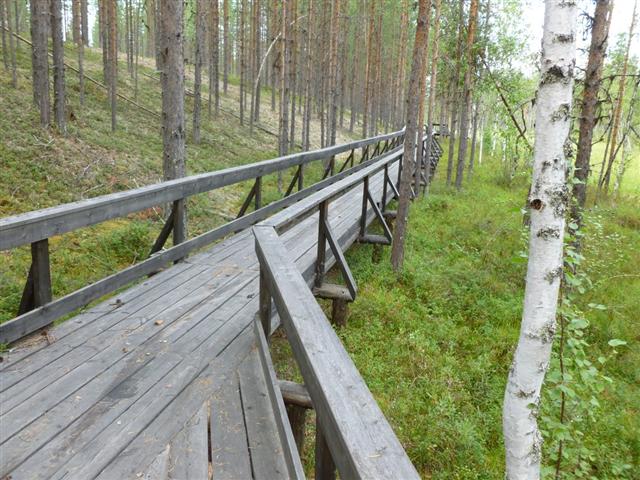 We decided to camp out for the night in the forest, using a parachute as our tent

It was a very pleasant evening fishing with a beer

After a cold night we had bacon sandwiches for breakfast 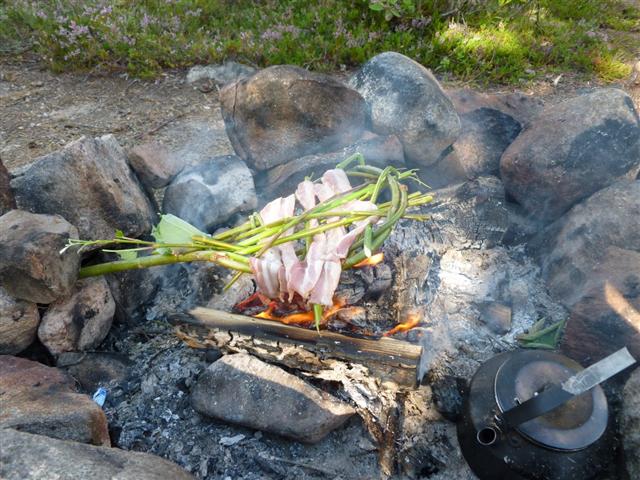 Last week we had a plant walk at the nature center.

Wood Crane’s-bill (Geranium sylvaticum) Thank you for correcting me Elma. 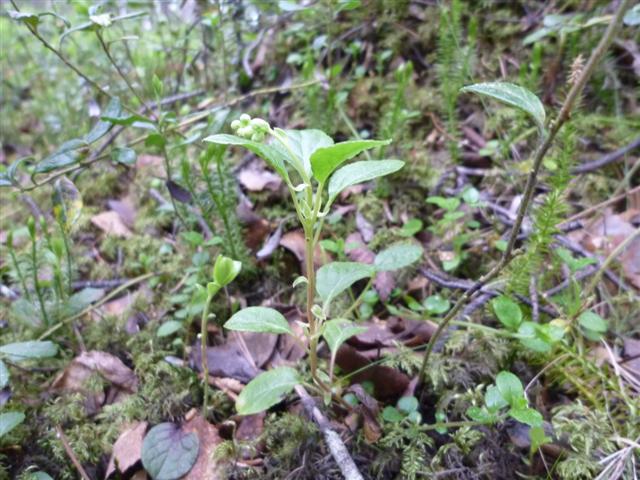 Round-leaved Wintergreen (pyrola rotundifolia) – a decoction of the leaves can be used as an antiseptic wash or to treat skin complaints. 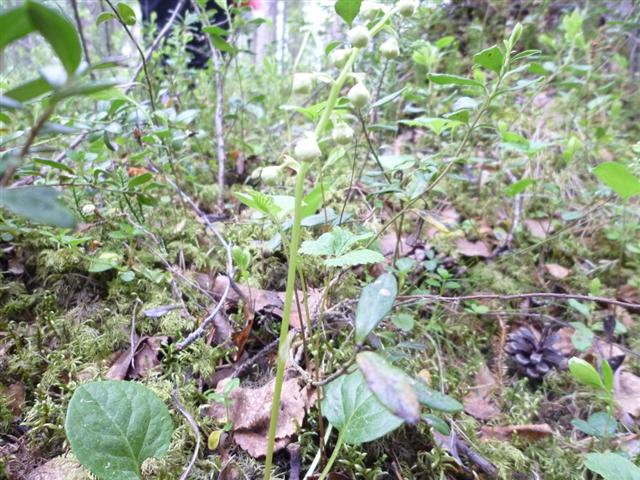 There were also many Mayflies emerging from the lake

and we found a Fen Raft Spider (Dolomedes plantarius) a rarity in the UK. 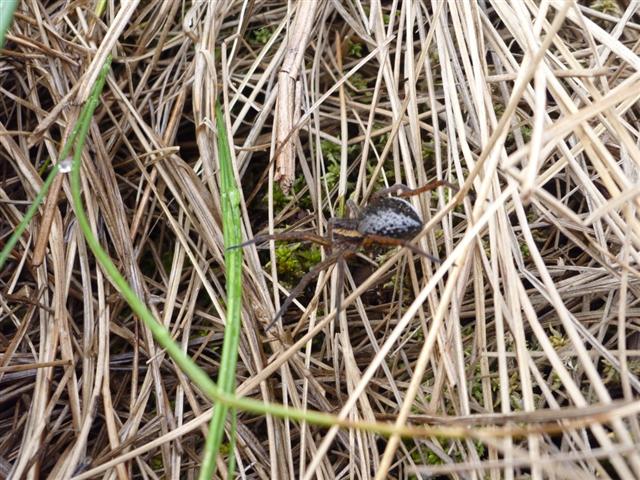 Yesterday I was in Dokkas (the village where we are trying to create a nature center) for the day.

My first visit was to the Jerttlompolo Nature Reserve, created by Arthur Leidgren due to the are being incredibly important to both migrating and breeding birds.  Unfortunately the lake there was still frozen but there were two Bean Geese, I Robin singing (not a common bird up here) and one Tengmalm’s owl singing during the day.

I then visited the much larger lake in Dokkas, where we have two birdwatching towers

We will be repairing the towers during the summer and we are currently seeking financial support to build another tower with access for disabled  people.

As I sat in one of the towers I heard another Tengmalm’s Owl singing.  There was also a Woodpigeon singing on the far side of the lake (which is another rare bird up here).  A pair of Kestrels have set up residence in one of the Goldeneye nest boxes we have put up and although the lake is frozen, there were four Whooper Swan present.  There was also a White-tailed Sea Eagle circling over the lake, 2 Common Cranes flew west calling and I saw the first Meadow Pipit of the year. 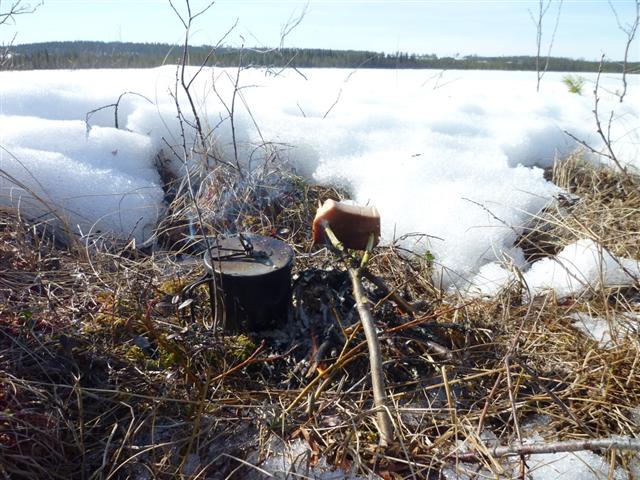 It was a beautiful warm sunny day and really nice to just sit there and look and listen.  There was even a Fox that ran within two metres of me carrying a vole in  its mouth, so I guess it has young nearby.