After lunch there were more workshops including cordage making

and by mid afternoon we were preparing food for our evening meal.  On both days the main meal was cooked in a pit.  A pit had already been dug and into this we made a fire.

Once there was a good bed of embers a layer of wet hay was put over the embers (on Sunday Nick cut a large amount of Stinging Nettles which were used instead) and the meat, having been wrapped in hay was then placed in the pit (we had Roe and Muntjac deer and some Wild Boar) 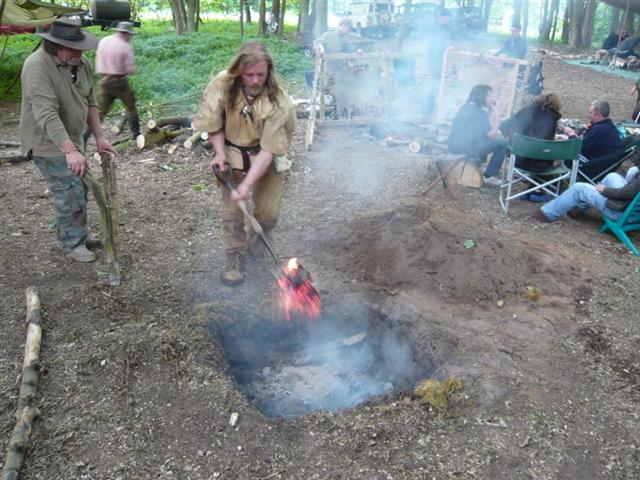 The pit was then left for four hours.

A piece of lean meat from the Roe Deer was held back, sliced into thin strips and hung by the fire to make jerky.

After 14 hours by the fire with the smoke keeping insects away, it had dried just right as venison jerky.

As dusk approached the meat was removed from the pit 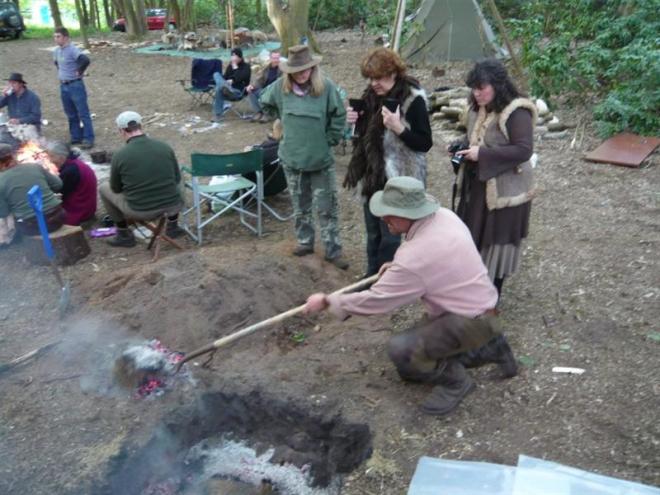 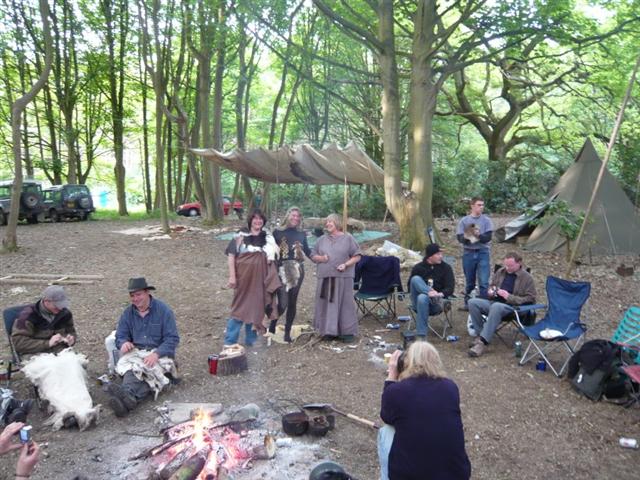 and the rest of the evening was spent eating more and drinking some very strange concoctions.

On Sunday morning after breakfast there were more activities and I ran a bow-drill and wet tinder workshop for a small group. 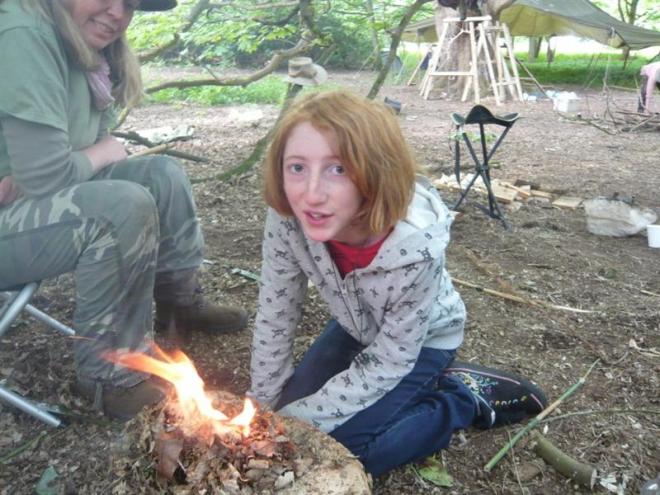 Hannah from Natural Pathways was keen to try the wet tinder oven.

I spent a lot of time chatting with Hannah and her assistant instructors Lief and Sal.  I would highly recommend there survival and nature awareness courses held in Kent.

I have been at Hardwick Wood near Cambridge today with other green woodworking friends.

Activities included bowl turning on a pole-lathe, spoon carving, cordage making and of course eating and drinking. I was carving as small cup using my spoon gouge.

Unfortunately it cracked before I had finished it!

In spring when the leaves are young, if you grasp them confidently and roll between your fingers, you can remove the stings without getting stung and eat the leaves raw. They make a pleasant snack.

I like to gather lots of nettle leaves, place them in a small amount of water, add vegetable stock granules and pieces of spicy sausage and boil to make a simple soup.

People are always skeptical about the cooking process breaking down the stings, but it really does. I really enjoy nettle soup!

Nettles are a rich source of minerals (especially Iron) and vitamins (especially vitamin c). They have been used in the treatment of skin complaints and rheumatism and internally are good for the kidneys and circulation.

I have found that the juice from inside the plant, counteracts the effect of the stings.

Having processed the Lime bark I have now been making some cordage. Lime bark has long been used for cordage and rope. The latin name of Small-leaved Lime is Tilia cordata (cordata meaning cord).

The cord in the picture below demonstrates different sizes of cords for a variety of uses; starting with a fine cord suitable for sewing and progresses through various sized cords, terminating with a piece of rope.

This cord has been made using the twisting method. Here is a closeup

This fishing line I am making is platted however.

Here in this closeup you can see the three strand platting

8 weeks ago I placed some Lime bark into a stream to begin the process of “retting” (Retting dissolves pectins which bind the fibers together, by the actions of bacteria. The bacterial decomposition that occurs during water retting produces a sweet smelling odor.)

Now that the retting process was completed it was time to remove the bark and process it for cordage.

The thin strips are hung to dry and can then be stored for use when necessary.