Last Friday it started snowing and continued until Sunday evening.  And with gale force winds the snow blew into drifts.  In some places there was no snow on the ground and in others it was up to 2 metres deep.  Teres took this picture as I cleared the snow on Saturday

and there was at least the same amount again on Sunday!

One problem that I; and most probably many others have when sleeping in a hammock, is that the sleeping mat doesn’t stay in place and I end up with a cold back.

but recently I found a Halti Travel Sleeping Bag on sale on the internet and though that I could put both my thermarest and sleeping inside it.

Here is more information about the bag; https://halti.com/collections/sleeping-bags-mattresses/products/smart-travel-sleeping-bag

Unfortunately, with both the thermarest and my sleeping bag inside, there was insufficient room.  So I came up with a solution to the problem, and with help of our sewing department at work, they are now making alterations to the bag.  My solution is (on the back side of the bag) to sew a pocket at the top and bottom of the bag and a band of material across the middle, into which the therarest is inserted.  It will only be my sleeping bag that is then inside the bag.

The bag is not yet finished, but I will put up some pictures here as soon as it is completed.

Following on from my last post about what we get up to in the Sea Cadets with bushcraft I thought I might go into a bit more detail on some of the areas we cover.

I tend to cover all the basics with the cadets and staff, such as shelter, fire, food, tools and games. Sounds a bit like the survival basics of shelter, water fire and food I know. I have though learned from looking at my pictures that I do not cover the skill of water purification too much with cadets – must be because it rains a lot here 🙂

This post focuses on areas we teach the cadets on how to set up some form of shelter.

When I started teaching cadets, campcraft was all about setting up tents, and at most showing cadets all the different types of tent. I felt it could encompass so much more than this, so started to teach cadets about some of the shelters I’d built as a child. One of the things that most struck me about working with Sea Cadets was that they were always taught and shown how sailors slept in hammocks on board ship: to me it was a logical step from this to introducing them to hammocks in the woods. I had never slept in a hammock before I joined the Sea Cadets, but now I will do anything to avoid sleeping on the ground (unless it is on a spruce bough bed).

I always like to teach using only positives. We discuss the need for shelter and look at the resources available to us then I ask the cadets to build something in groups. After they have built their shelters all the cadets discuss each others’ shelters, but they are only allowed to give positive feedback. From these positive learnings we set them off again to build another shelter and I always find the differences amazing.

Snuggled without a fire

Weather permitting, I will offer cadets the chance to sleep in a shelter that I think is of a good enough standard. I do love to listen to them in the morning telling their friends of all the noises they heard in the night. If the weather is too bad (for example, heavy rain) the cadets don’t sleep in the shelter but I leave some pots in there instead to see if they leak, and to prove how good they can be.

Snuggled with a fire

When we set up camp I like to get the cadets involved as much as possible and one of the tasks that I find a chore but the cadets love is to help put up the parachute under which we have our group fire. It can be fun getting the line up into the trees:

Mereworth missile on an extension pole

It is a good leadership task to set them and after it is set up I find they do appreciate sitting under the chute more.

All the cadets who come on a bushcraft course now know we have hammocks they can use. Some have even bought their own which is great to see. It was with a heavy heart three weeks ago I had to tell the cadets on a course I was running that because of the high winds that weekend they would not be offered the chance to sleep in hammocks. Sometimes you have to make decisions that not everybody is happy with but luckily that is rare. When they do get the chance I always have more volunteers than hammocks (I have fifteen now).

They have to set up their own hammocks under supervision . 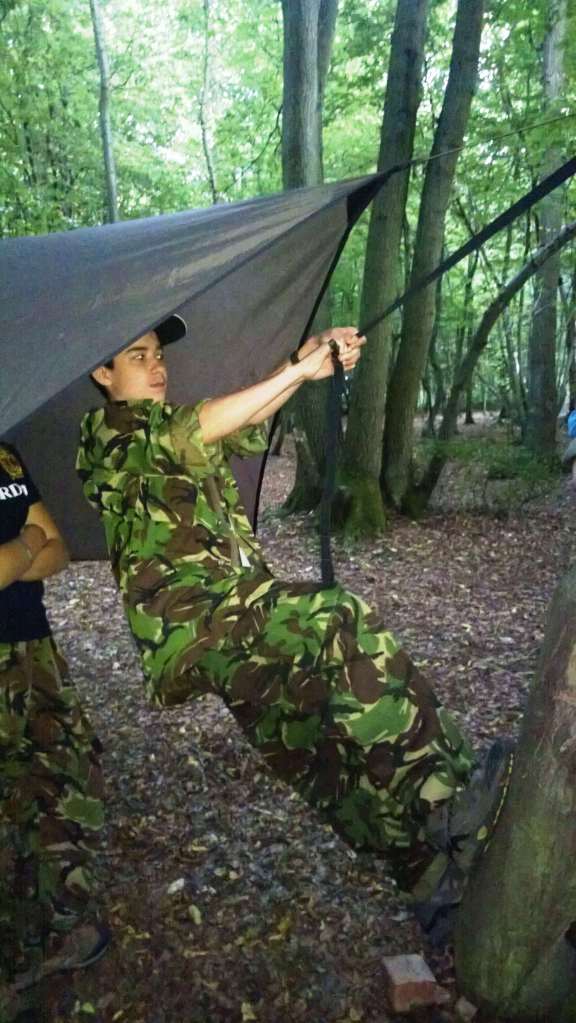 Makes for a great picture.

Hammock or the ground – Which is best – hmmmmmm!!!! 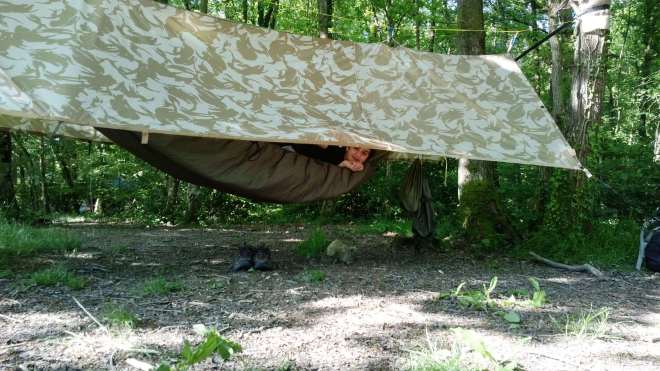 Sometimes we experiment. This is a freestanding hammock stand.

We have to raise funds for all the equipment we buy as the Sea Cadets are a registered charity. I ran a charity bushcraft course last year that helped to pay for some of these hammocks. Also I received an award from the Jack Petchey Foundation that went towards the equipment we use.

Once you’ve sorted your shelter, you need a good cup of tea: the next blog will cover what happens when cadets start to play with fire.

Teres’s children had been given time off school to join us at the cabin, to learn more about nature and improve their English.  Before driving back to the cabin I visited the Dollar Store to buy a variety of items with which the boys had to build boats to sail across the lake.

In addition to the items I purchased they could also use any natural resources.

Seb and Emma where keen to try out my hammock

Emma spent more time trying to fall out of the hammock with much success I might add!!!

While splitting logs my chopping block had split in half and so Ingvar cut me a new one…..the easy way!!

Having spent some time teaching Seb how to use a firesteel he spent a lot of time trying to make fire and I was impressed at his determination to achieve fire…..and he did. 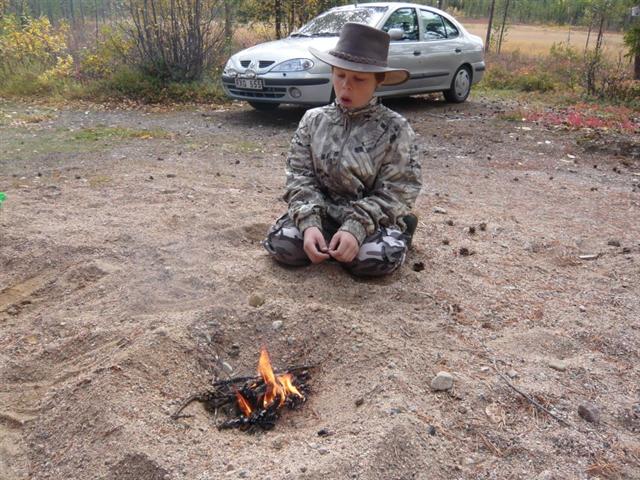 In the evening the boys put their boats on the lake 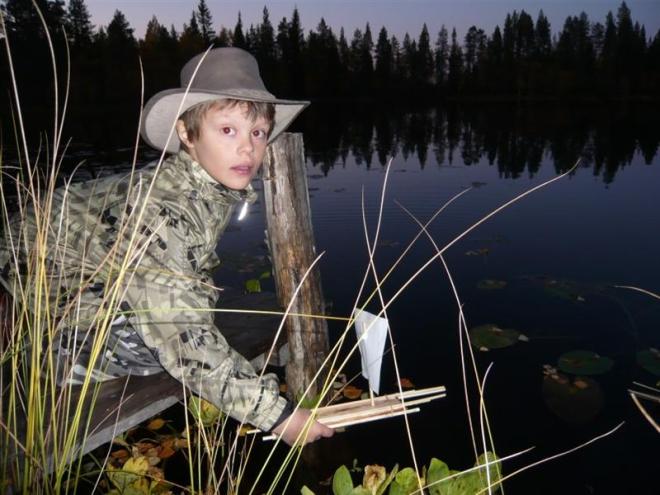 and once the wind caught the sails we watched them race across the lake.

It was a reasonably nice night so I decided to sleep outside, rather than in Stuarts tipi. I can’t remember the last time I used my hammock, so I set it up and then used my black sleeping bag bag and bivvy bag from my modular sleep system together with a 3/4 length mat inside. If I do not carry a mat with me but have my Swanndri hooded bushshirt as insulation in the bottom of my hammock and it works very well. After a very comfortable nights sleep I was awoken at about 7am by Stuart reviving the fire and getting the kettle on.

Once the kettle was on Stuart started to prepare breakfast, so I decided I should get up and give him a hand.

After breakfast I walked around the site with Stuart and Acer to show them the right types of wood to collect for different parts of the bow-drill. We gathered Hazel (Corylus avellana) for all parts of the set with the exception of the bearing block for which we used HornBeam (Carpinus Betula).

We made a couple of bow-drill kits from the materials collected and Stuart was keen to give having spent a lot of time recently trying without success. Within 15 minutes he had his first ember and then proceeded to produce a second ember a minute later.

After a late lunch we sat and chatted and then mid-afternoon we headed home.

It has been a long time since I used my hammock and tarp, so I used them at Assington Mill last weekend.

My tarp is a Hennessey Hex-fly and the hammock is my own creation. I use a Reindeer skin (or my Swanndri hooded bushshirt) to line my hammock for insulation. The nights were warm enough that I only had my sleeping bag laid over me.

On Saturday night I was serenaded all night by a newly arrived Nightingale.

and I also heard badgers squabling close by.