Heavy rain showers continued for the rest of the day and by 8pm we were back at the lavvu.  I walked up the side of the mountain behind the lavvu to try and find dry fire wood amongst the Mountain Birches and found I bird I had not expected to see….a Lesser Spotted Woodpecker Picoides minor, about the same size as a Chaffinch, and as I collected fire wood I soon found why it was there….here is its nest 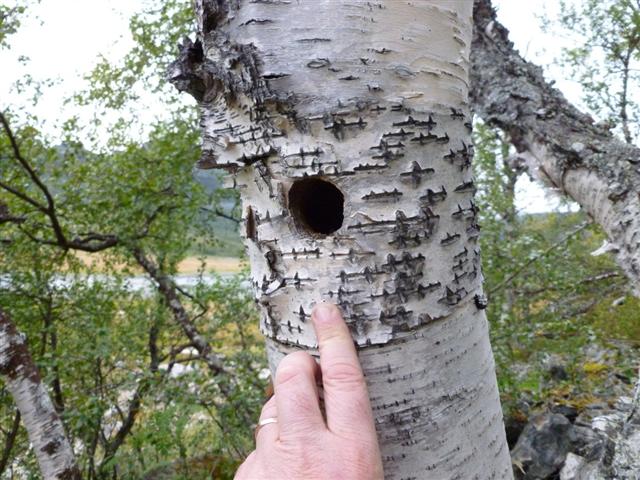 We were early to bed and hoped for an improvement in the weather next morning.

When we awoke our hopes had been fulfilled.  Here is the view out of the lavvu 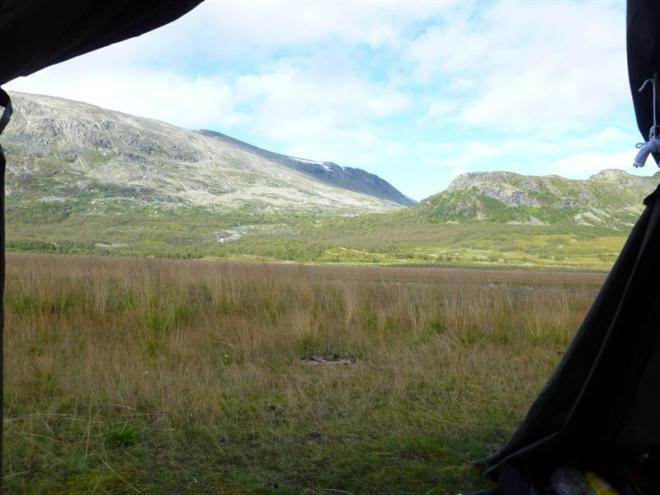 It was so nice to be out in the sunshine

We fished for a couple of hours

and admire the sunny scenery

But as the wind started to blow again, we decided it was time to head home. 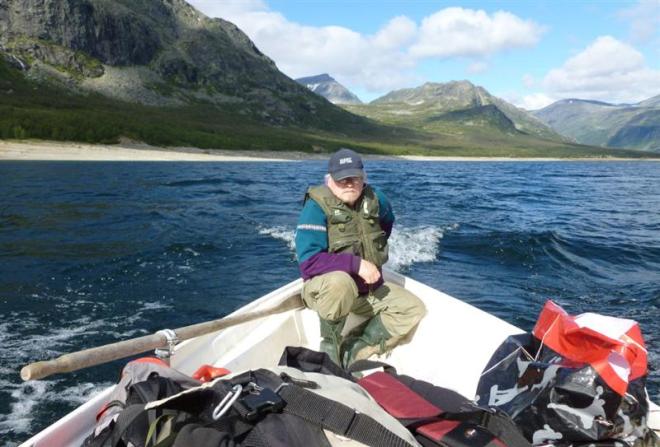 My total catch was 22 Grayling which I was very happy with. 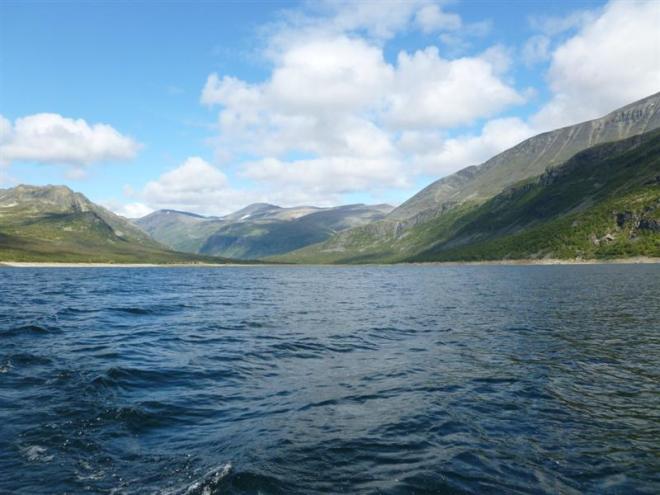 I spent the evening in the forest fishing but caught nothing

and it was such a lovely night with the full moon 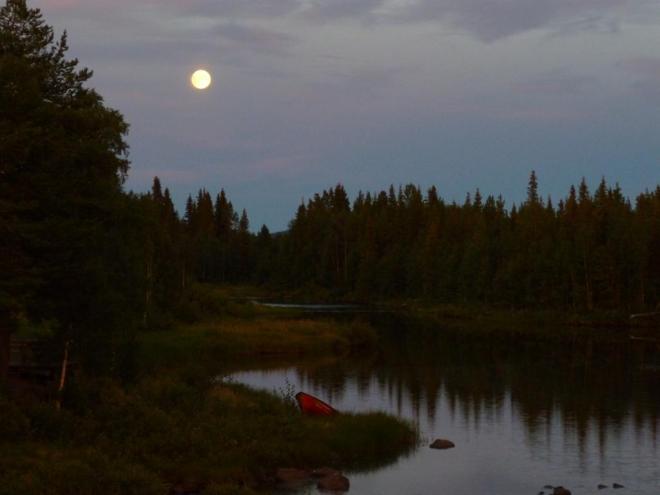 On Thursday myself and my friend Tommy drove to the fjälls for a fishing trip.  Our destination was on the side of a river that flows into a large lake called Satihaure.  We drove to where the road ended, unloaded the boat

There was a strong westerly wind and heavy showers.  When the showers came, the wind increased and the boat was struggling in the head wind, so we decided to stop and fish for a while.

When we awoke the sun was shining and the wind had dropped, and so we packed our gear in the boat and headed off.  Once we were out in the lake the wind began to blow again and there came some heavy rain showers.  I was amazed to watch a flying Red-throated Diver carrying a fish, gradually climb in altitude and eventually disappear over a mountain top. 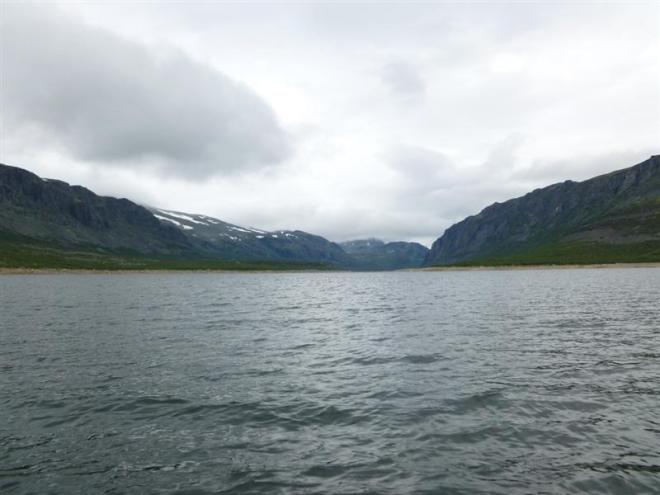 The water level in the lake was 5 – 6 metres below what it should normally be and Tommy was finding it not so easy to navigate avoiding the shallows and large bolders under the water.

As we left the lake and travelled up the river I had to sit at the front of the boat and give Tommy direction to stay in deep water, but eventually we could not go any further. 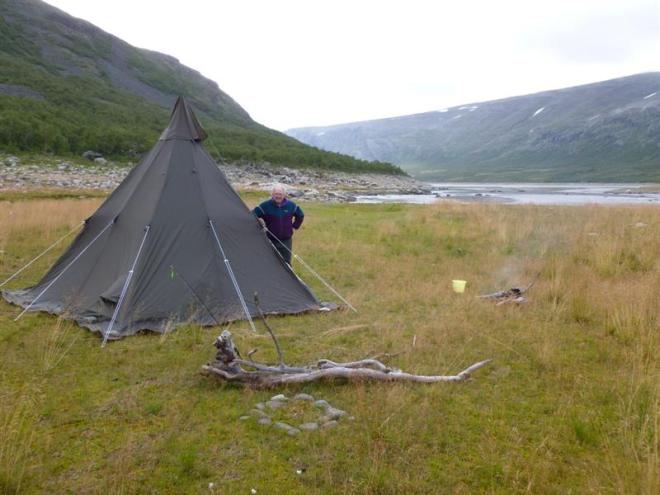 I made corned beef hash for lunch

After lunch we began fishing and both caught several medium sized Grayling.  We our way up-river fishing for a couple of kilometres.

We caught some nice sized fish

and it was good to be able to make fire, cook some coffee and grill fresh fish at the same time

I had heard reports that for the first time in many many years there has been an unusually large explosion in the Lemming (Lemmus lemmus) population in the mountains.  This used to happen on a regular cycle every four years but now it is a much rarer occurrence to have such a large increase in population and no one seems to know why the increase occurs.

The Lemming is a large rodent up to 15cms long and easy to spot due to its variegated colours of black, yellow and rusty brown.  Density of Lemmings in very good years can be up to 250 per hectare.  When the population density becomes to high the Lemmings travel to other areas, crossing streams and rivers and covering great distances.

A female Lemming can have 6 litters per year and a litter will consist of up to 12 young.  The young females become sexually mature at 20 days old.

to see if I could find any

There was a very cold northerly wind and it was snowing, with a temperature of about -5 degrees.

I spent three hours searching what looked like good habitat

There was much vole spore 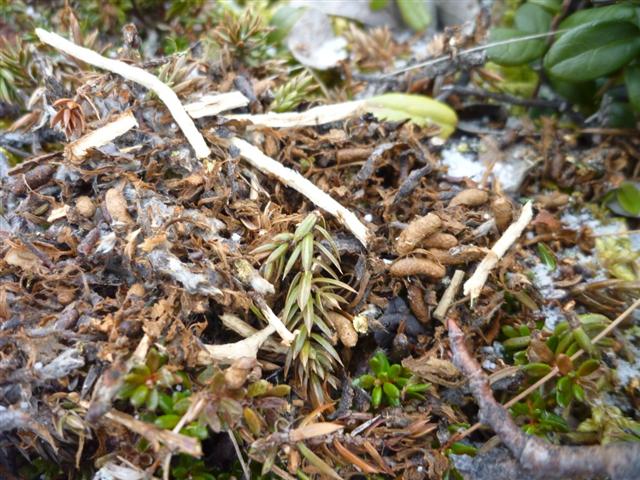 but nothing to suggest that Lemmings were there.

I had to shelter behind a small rock to make fire and cook food and coffee, using dead Pine and Juniper as fuel

Today however, we decided to drive along the road to Ritsem to see if we could find any Lemmings.

and it wasn’t too long before we saw our first Lemming running across the road.  I had to chase after several before I finally caught up with one 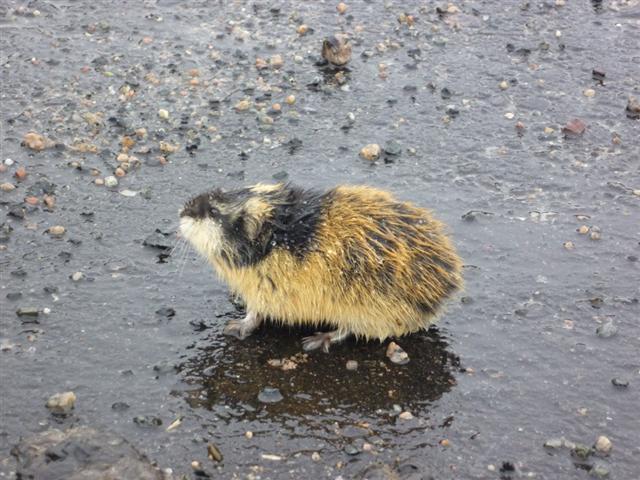 Hundreds of mosquito’s came into the laavu during the night.  I was fortunate enough to have a piece of insect netting material to put over me, but the others were not.

We awoke at 7am, made fire and cooked breakfast 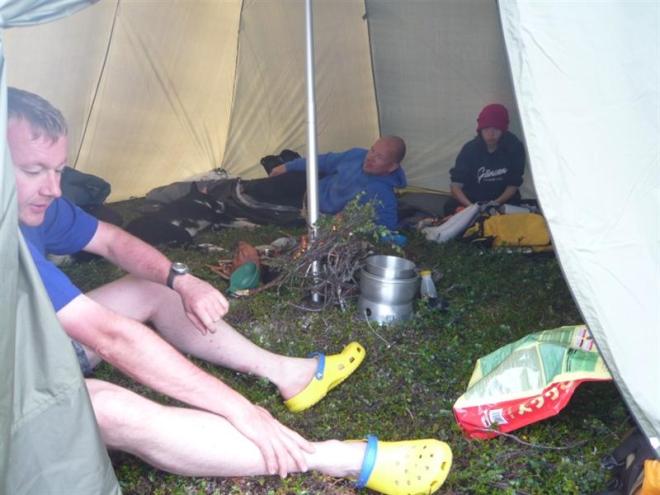 After breakfast we were soon packed and on the trail again.  Very soon we located an old camp with an old fire site from in a kåta, defined by a ring of stones 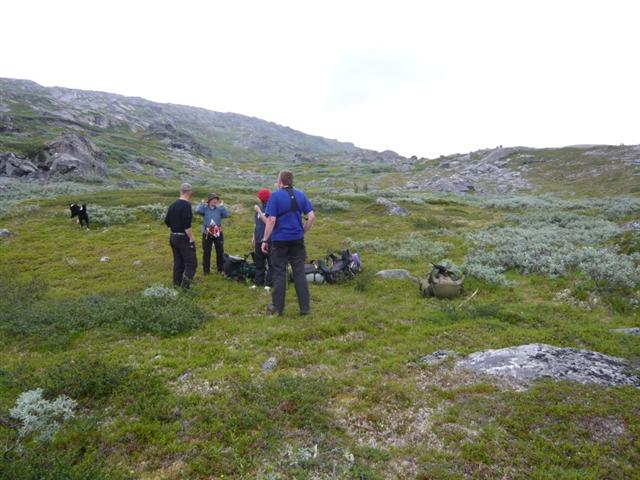 We also found an old turf kåta and discussed the idea to repair it as shelter for people walking the trail, where they can either sleep or just make fire and cook coffee.

Late morning we encountered a heavy thunderstorm and heavy rain.  The rain continued when we stopped for lunch and so it was challenging conditions to make fire.

can be ignited very easily, even in the wet.  And it was not long before we had a small fire going

We arrived back in Ritsem at 7pm and for me it was a great relief as I had been suffering with pain in my hip and back.  I am now seeing a chiropractor who found that my pelvis was twisted and had to be re-aligned with my back.  This may unfortunately mean I cannot attend the second week of the course from Norway back to Ritsem…..we shall see.

The soul of my boot also split along the route and so I had to buy new boots when I arrived home.  Per-Erik has used many different makes of boots and his recommendation was a pair of Viking Hunters

We walked up a rocky slope, through Mountain Birch forest to join the trail

In the middle of the afternoon we stopped to make coffee and eat some food.

Per-Erik explained that Sami people remove their boots whenever they stop to allow both the feet and boots to breath and dry, reducing the risk of blisters.

We located two old burial sites but I decided not to photograph them.  We also found sites where would have been staying and milking the Reindeer.  Here is one

The pale area of ground on the left of the picture is where the kåta would have been situated and on a flat area of lush green grass in the top right corner of the picture they would have milked the Reindeer.  It was over looking this area that we decided to set up the laavu and make camp 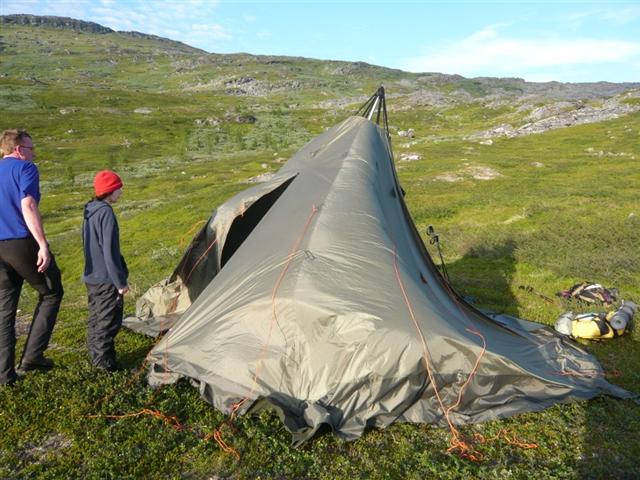 My project in the evenings while staying at the cabin had been to make a bone needle from a Reindeer rib bone I found near to the lake shore.  I used an old nail from a piece of wood I found nearby to score the bone and remove a small piece.  I used a flat stone to abrade the bone into a needle shape

There was much Cotton Grass along the shore

and as expected this proved to be incredibly good for firelighting with firesteel.

At 11am we boarded a boat at Ritsem 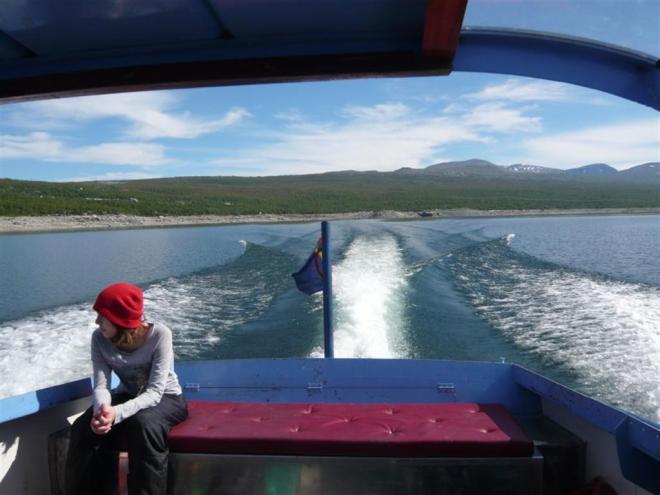 to travel 20kms up the lake, where the boat dropped us on the lake shore 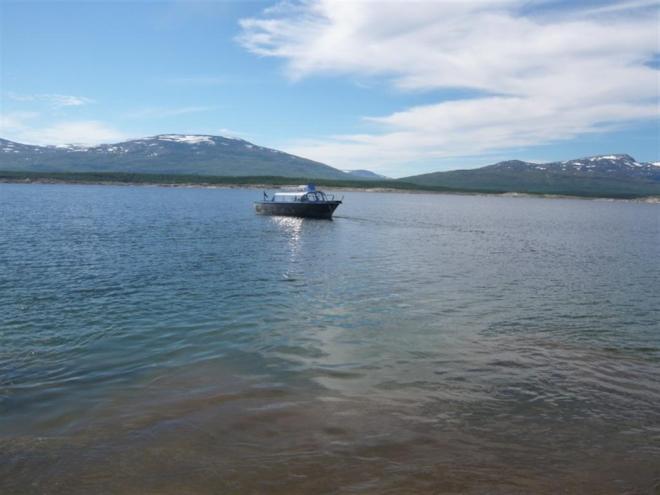 we then had to walk a short distance to join Gränsleden and walk back to Ritsem along the trail.  But first we made fire on the lake shore and made coffee

After a short break we were soon on our way.

We also found Rosenrot (Rhodiola rosea) which was referred to as natural viagra for the Sami people and has many other uses.

Can you guess what family this little plant belongs to…

Its a willow and  the Latin name is Salix herbacea and its English name is Dwarf Willow and it has adapted itself to the harsh life in the fjalls.

We also found a Lemmings burrow

but the old droppings outside suggested it is not currently used 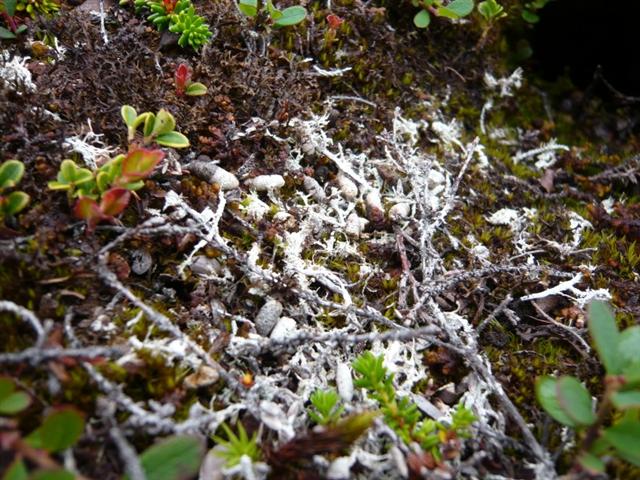 One reason for this may be a Rough-legged Buzzards (Fjällvråk in Swedish) nest that we found near by.  We also saw Golden Eagle, Golden Plover and Ring Ouzel.

and although not as obvious in this picture, a well worn trail was clearly visible 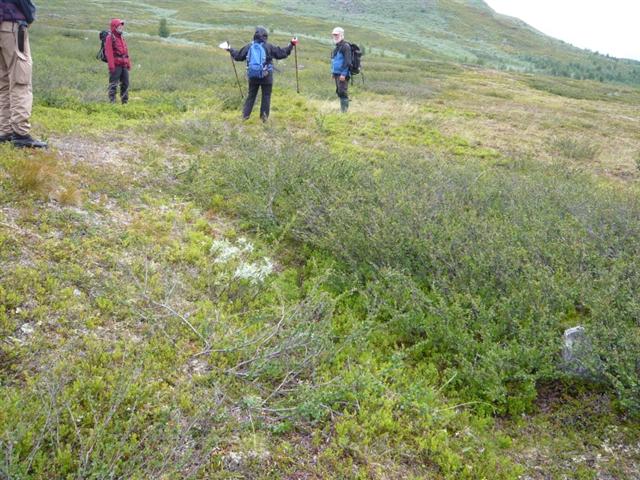 Lunch was a chance to chat 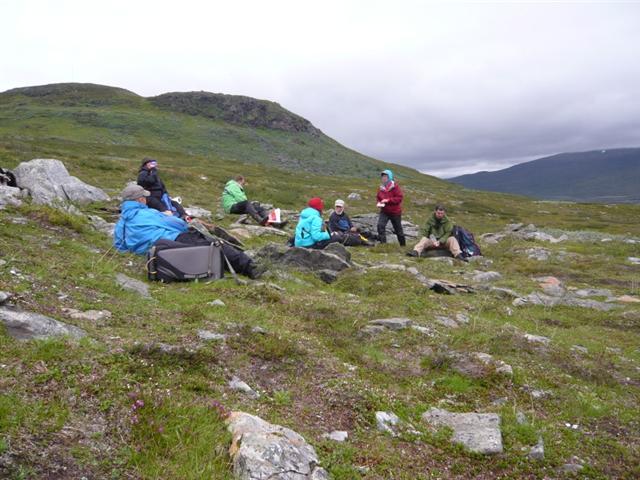 and take in the views 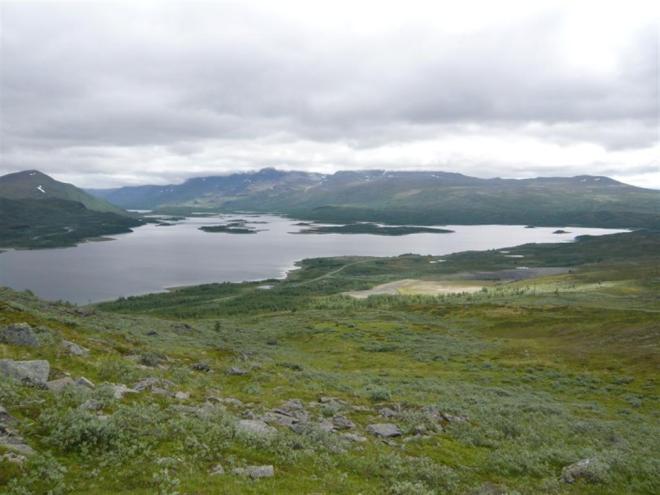 At the end of the day it was back to the cabin to pack and prepare for two days away walking the first 20kms of the Rådjebalges trail.

and opposite to a glacier on Ahkka

Day three of our course covered the geology and natural history of the area and our tutor was Thomas Öberg.

Here Thomas was explaining to us how the fjälls were once part of the Appalachian mountain range prior to platonic shift.  His slide shows how North America and Europe were joined together at that time.

Sausage or korv in Swedish is so important within Swedish culture that they even name features after them, in this case a lake

After the classroom session we moved outside and walked around in the local area looking at the natural features and wildlife.  Here Thomas is talking about a post glacial feature called a pulsa 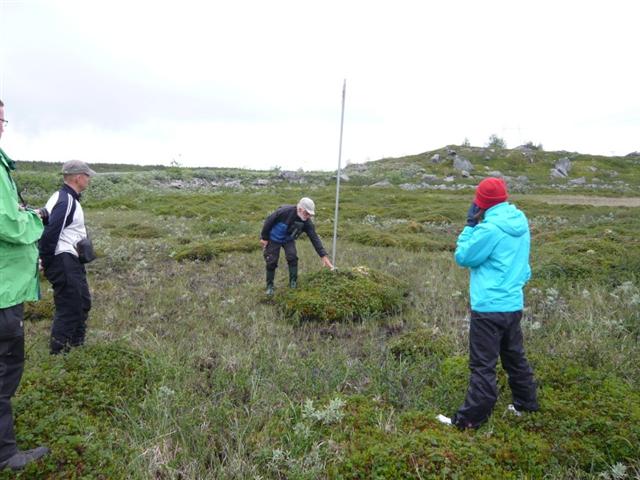 Pulsa’s are important breeding habitat for the Red-necked Phalarope.

This plant with a star shaped rosette of leaves is called Common Butterwort or tätört in Swedish and both here and in the UK the leaves have been used to thicken or clot milk in the butter making process. 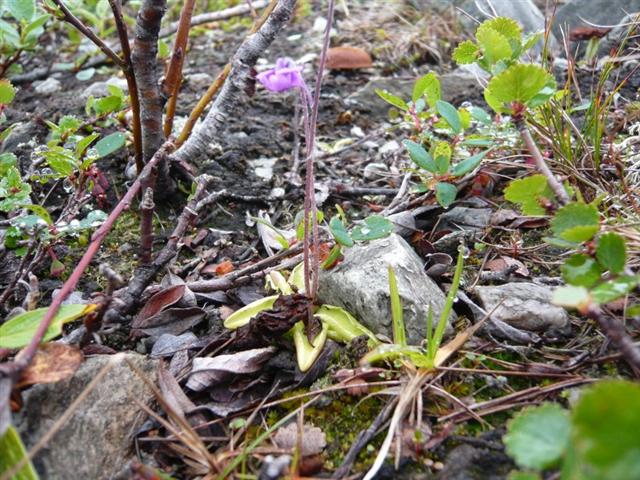 This plant is called Alpine Bistort or in Swedish Ormrot (snake root) and it was a staple food for the Sami people and was used like a potato and it is also rich in starch.  They can be eaten raw or cooked and tasted very good.